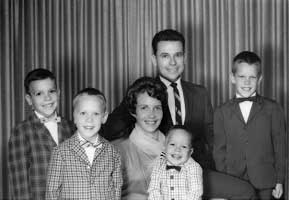 Creative Composition was founded in Brea, California by Ed and Gayle Hendry in 1968. The couple had 4 boys. Ed was an outside salesman for Cal Snap & Tab a commercial printing company that specialized in business forms. His sales territory was in the greater Los Angeles area. He found there was a need among his clients for someone to design and set up the forms that they needed printed.

Gayle was a stay-at-home mom, and even with four boys felt she didn't have enough to keep her busy so she and Ed started a form designing company on the 2nd floor of their home. They bought typesetting equipment and were able to develop camera-ready art for their clients. As the business flourished Ed decided to quit his job as a salesman and devote his time to building Creative Composition.

The couple purchased their first building in downtown Brea and moved the business out of the house. After a couple of years the property became prime real estate due to redevelopment efforts in downtown Brea. Ed and Gayle wanted to get out of the smog and hustle-bustle of the LA area. Remembering his time in Chico as a young boy, Ed decided to move the family North.

In 1974 they landed on a 19-acre ranch in Orland. They built a building on the ranch to house the typesetting equipment from Brea and they began to buy printing equipment. Ed went back on the road. Instead of the crazy commute in south LA he found the drives in Glenn and Butte Counties to be much more pleasant. He developed business accounts and continued to grow the business until it was time to move again.

The next expansion was to a new location in Orland. During this time, as the boys grew up, some decided to work with dad in the company. Keith was first and learned how to operate offset presses and was the company's first press operator.' Mike came on board in the early 80's and would become a pressman and press mechanic. He was instrumental in adding our first web (roll fed) press. Mark and Steve joined the business in the 90's. At this point Gayle's dream of her family working together became a reality.

CCI outgrew its first building in Orland and purchased a new one across town that would accommodate the growing printing and mail business. Creative Composition realized that the world of printing was changing and moved into the direct mail advertising arena.

In late 2010 Creative Composition was able to move into this building, one large enough to handle all of the company's large computer based printing machinery with room to grow.

Today the company continues to innovate and has become a full-fledged marketing company. Our goal is to provide powerful cutting edge Marketing, Printing and Mailing solutions for our clients empowering them to serve their clients, resulting in a win-win-win scenario, or as we call it, the "Triple Win"